Pearl of the Haut Var - Verdon

Discover the history of the largest emerald in France: the lake of Sainte Croix.

It was Georges Clémenceau in 1902 who first put forward the idea of an artificial lake on the site where Lake St. Croix is now located. The idea was taken up again and then abandoned in the course of history. It was not until the 1960s that the project was set in motion under the leadership of EDF. But it provoked an outcry among the local population because it involved the disappearance under water of three villages in the vicinity of the future lake: Bauduen, Les Salles-sur-Verdon and Sainte-Croix-du-Verdon. The project was then rethought so that only the latter would be submerged and thus preserve as much as possible these beautiful Provençal villages. 1973 marks the completion of the construction of the dam and the final impoundment of the lake on November 15 of that same year.

The dam of Sainte-Croix was built in 1974, it led to the disappearance of the valley and at the same time swallowed up the source of Fontaine l'évêque which continues to flow at the bottom of the lake, with the fields, the farm and the businesses that surrounded it. This new landscape also separated the lakeside villages, which were once connected by four bridges. Among them, the Roman bridge erected south of Sainte-Croix on the axis of the Roman road Fréjus-Riez, and to the north the medieval bridge of Aiguines, sleeps under the water.


The lake of Sainte-Croix is above all a water tower which allows the feeding of a large part of the inhabitants of Provence. In the middle of a preserved and beautiful landscape, water activities are practised there twelve months out of twelve. The Lake of Sainte-Croix is now the 4th largest artificial reservoir (i.e. an artificial water body fed by runoff and/or rivers) in France with more than 767 million cubic meters of water spread over a surface area of 22 km2 for a length of 11 km and width of 5 km, allowing the dam to provide 142 GWH per year. 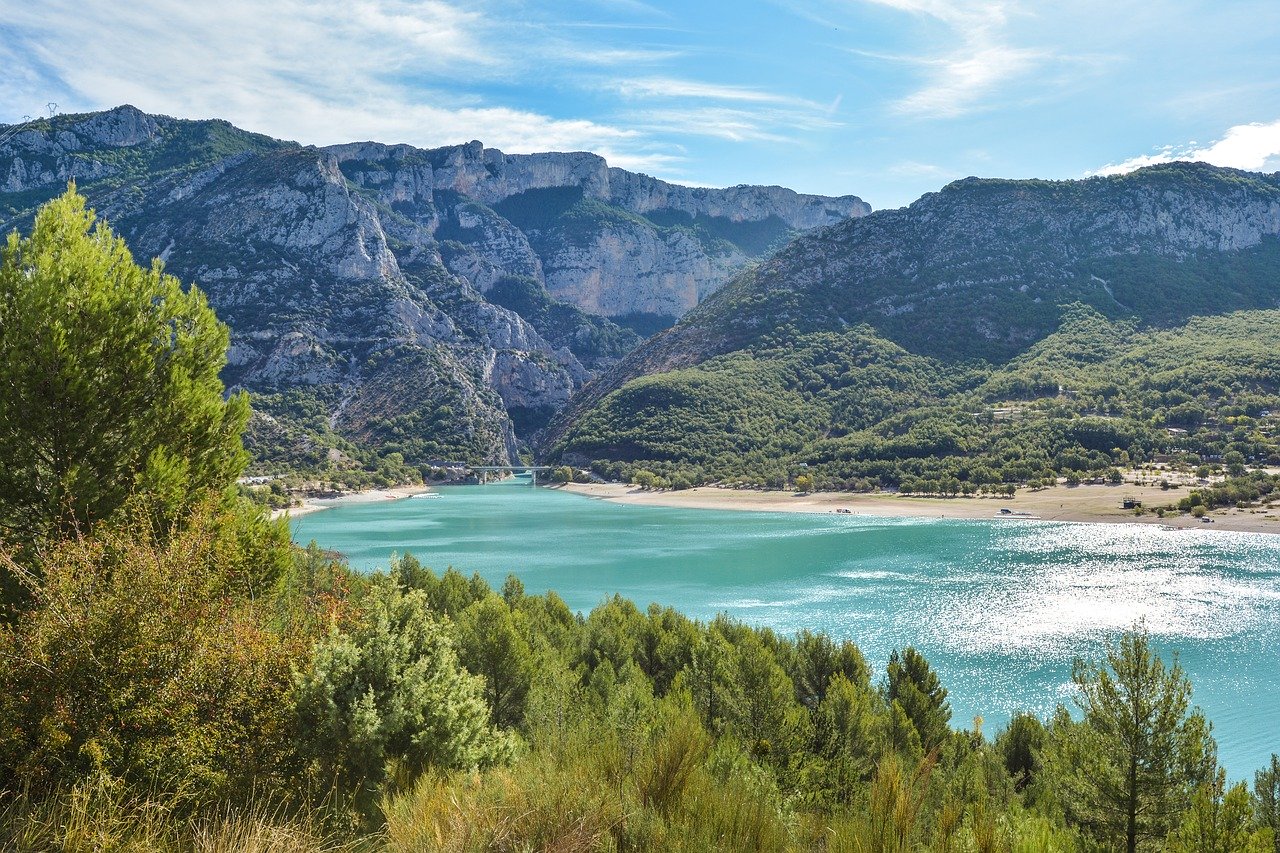 Visitors and locals alike agree that the Sainte Croix lake is one of the most beautiful sites in the Alpes de Haute Provence region. In the heart of the Regional Natural Park and at the entrance to the Low Gorges of the Verdon, it is a real little corner of paradise where you can admire, thanks to the clay bottom that lines the lake, turquoise water stretching as far as the eye can see. The lake is also praised for its soothing calm. Indeed, boats with gasoline engines are prohibited to navigate to make way for rowing boats, sailing boats or hydroelectric boats. The only gasoline-powered craft allowed to approach the lake are Canadairs landing on the water for supplies, the waterhole also being a useful reserve in case of fire.

Where to swim at Lake St. Croix?

If you feel like swimming in the emerald water under an azure blue sky then we recommend you head to the Galetas beach located 20 minutes by car from our campsite. It is right next to the entrance to the Grand Canyon and close to the Pont de Galetas which leads to the village of Moustiers Sainte Marie,

This beach has the advantage of offering a supervised swimming area during the July-August period to be able to swim in complete safety. 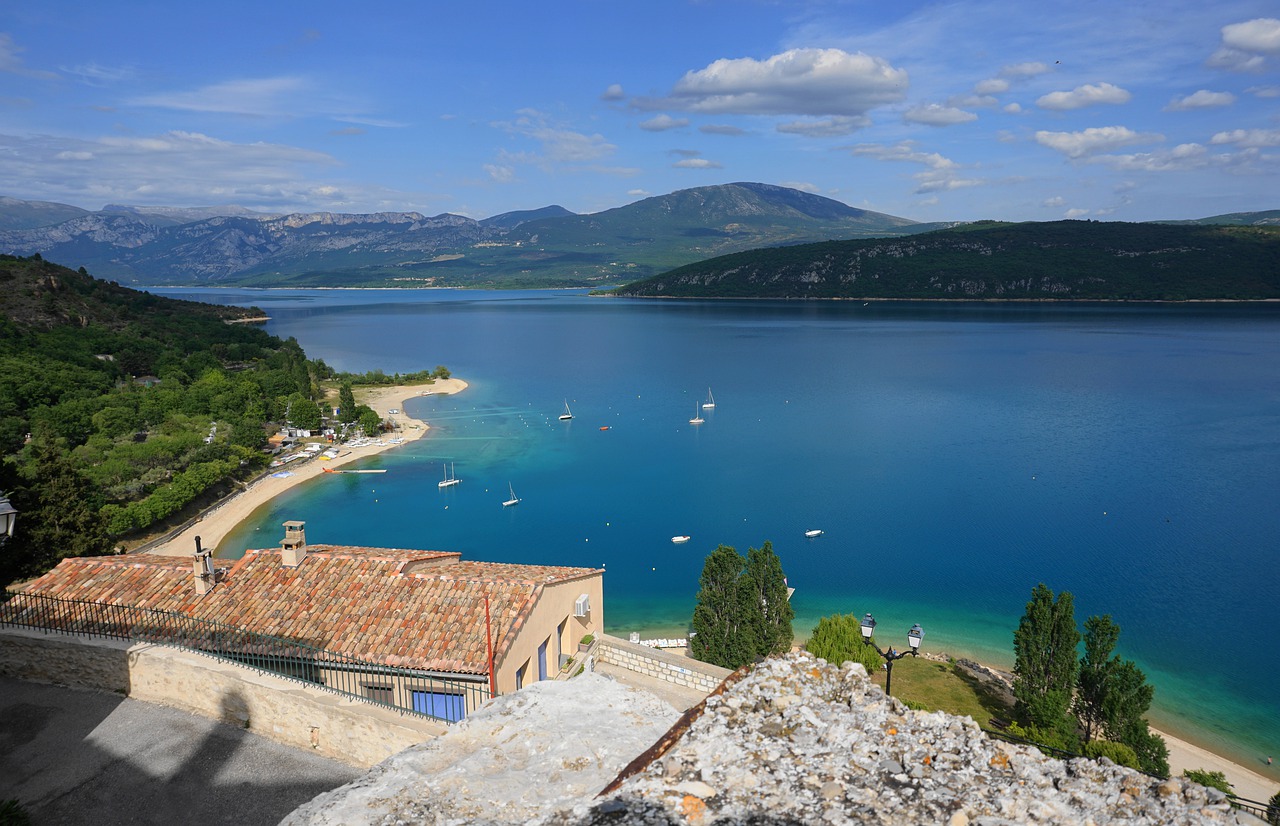 How to navigate on Lake St. Croix?

Whatever your desires for adventure in terms of water activities, be sure that they will be satisfied at Lake St. Croix. Indeed, the various clubs around the lake offer a wide range of possible water activities: canoeing, kayaking, paddle, pedal boats etc.. Choose your boat and set off to discover the Grand Canyon along the water.

We advise you to go there early in the morning, especially during the July-August period which is marked by a great influx of people.

Lac-loc : located near the village of Sainte-Croix Du Verdon, this nautical club offers the rental of several models of pedal boats (4 places, 6 places, with or without slide etc.), canoes (1, 2 or 4 places), electric boats and paddle boats.

Is it possible to fish at Lake Sainte-Croix?

Fishing is allowed all year round. The lake is considered as a second category fish course.

Each angler can have up to 4 lines and must respect the following quotas :

Salmonid quota: 6 trout per angler per day, including a maximum of 3 fario trout.

Carnivorous quota: 3 fish per day and per fisherman, including a maximum of 2 pikes.

During the closure of the pike fishery, the use of live, dead or artificial fish or lures that are likely to catch pike in a non-accidental manner shall be prohibited.

Caution: classified as a "large inland lake", fishing is regulated by prefectoral decree specific to the lakes of the Verdon.

If you wish to discover the surroundings of the lake on foot, we advise you to take the circuit of Bauduen which will enable you to appreciate the path under the shady pines and the superb view on the lake shore. If you want to climb a little higher and you are an experienced climber, then we advise you to tackle the Montée du Grand Margès which from the top of its 1577 meters will give you a breathtaking view of the lake and the Gorges.

And for those who still want more, a new GR has just been laid out to discover the tour of the lake on foot!

Other corners of paradise you must see :